You are reading an exclusive guest post by Austin Gunter » 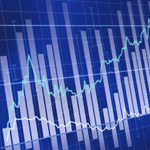 One of the important factors in the speed of your site is the distance between your servers and the browser visiting your site. The time it takes the information to travel from the server to the browser is called latency. Latency increases with distance, so no matter how fast your servers may be, high latency can make your site load slowly for visitors who are geographically removed from your servers.

The question of latency came up when WP Engine, a managed WordPress hosting provider, and the company I work for, began fielding support calls from Asian and Pacific geographies. They had a variety of questions about our hosting, but we answered the same question about latency several times:

“How much faster would my site be to me if I moved it to another location?”

We decided that it would be helpful to share a tutorial of how to answer this question for those so inclined.

This question often came from an Asian country who was asking if their site would load faster on their continent if they moved their hosting from North American servers to Asian servers. The distance between the browser and the server are an important factor in how quickly a page will load in a browser. It will simply take longer for a page to load in China if it is being served from Dallas, Texas instead of Beijing.

It’s fair to say that most, if not all, big WordPress sites have visitors from across the globe, so it can be useful to know how to test the relative speed differences between hosting companies or locations, so we’ll show you how to use Apache Bench to do that.

That’s because distance typically increases latency but not throughput.

For example, suppose a browser in London is hitting a server in New York City. First it has to make the request for the page — traversing the Atlantic or bouncing off a satellite — then the server starts sending the response, which now also has to move across the Atlantic.

Actually, in reality it’s worse than that. That’s just the HTTP request, and before that even happens you have to establish the TCP/IP connection, which takes another back-and-forth (actually there’s three legs to that protocol, but we’ll gloss over that detail), so the true equation is:

If the browser is in New York City, L will be small, perhaps as little as 40ms. Whereas even on very fast servers like we have at WP Engine S is at least 250ms, and typical hosting providers with page-cache plugins have 500ms of S. Without page caching S could be up to 1-4 seconds. Therefore, when you’re close to the server, S dominates the equation, and the speed of the server is the most important factor.

However, with a browser request from London, L is easily 500-750ms. With a fast server the latency is an order of magnitude more time than the server time. At great distances, the latency will completely determine the apparent speed of your website.

So how do you easy measure latency in the field? And in particular, how would we measure the difference between identical servers in London and NYC?

There’s a simple, free tool from Apache called Apache Bench, which we recommend for basic tests like these (and many other too). You can run Apache Bench from Terminal on a Mac, or Putty on Windows. There are other options depending on how secure you want to be.

To make sure it’s working for you, let’s see what happens when you run it once on our company homepage:

ab http://wpengine.com/
(Note the trailing slash — ab is finicky about that!) 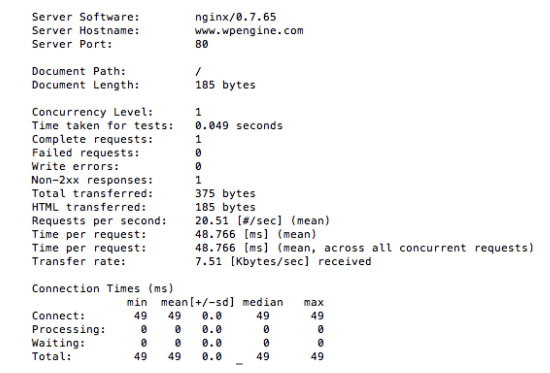 So what we really need is to run N trials and aggregate the results. ab can do that. Suppose N is 100, and just do this:

Now the results are more interesting, showing us average and standard deviation, as shown in this sccreenshot: 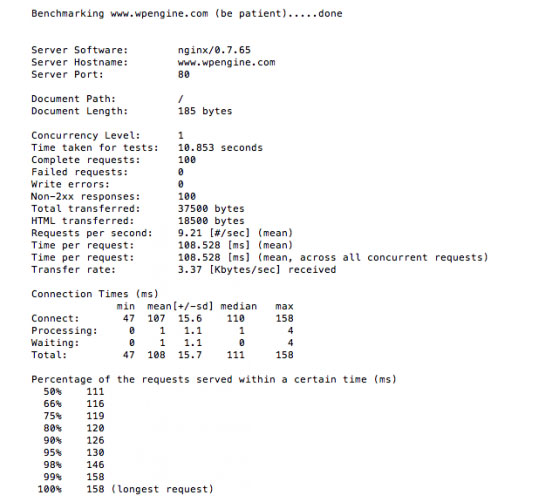 In particular, check out the “time to connect” and “time to start,” which show the 2L time to establish the TCP/IP connection and the additional 2L + S time to request the page and start getting the data.

In fact, just from these two data points we can compute L and S! After all, we have the following:

So subtracting (1) from (2) we find that B – A = S, and A/2 = L. Now, this is just an estimate because, remember, there’s lots of potential error and variation here. Still, it’s a good bit of data to gather.

Now of course we only have to run the same command from a machine in another location to find the difference in L.

So to solve the original problem, the person in London can run Apache Bench against a copy of her blog in London and the live one in New York City to measure the difference.

This is a helpful method to check your site’s latency in various geographic locations. Just because it’s blazing fast in the US, does not mean that your customer in Europe or Asia will be getting served as quickly, especially if the closest server is far away.

Let us know what you think! How else are you guys using Apache Bench, or how has measuring this latency changed the way you’re managing your WordPress?

This guest post is by Austin Gunter, blogger and brand ambassador for WP Engine. WP Engine offers fast WordPress hosting that is optimized for speed and security. They also like breakfast tacos and long walks along the server beach.

View all from Austin Gunter 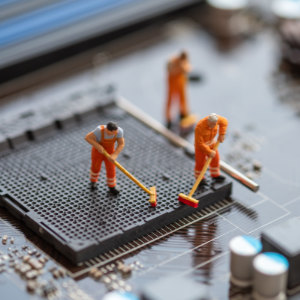 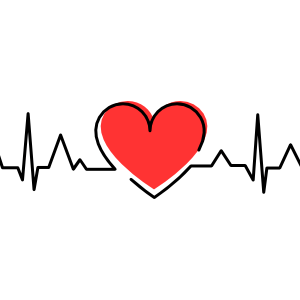 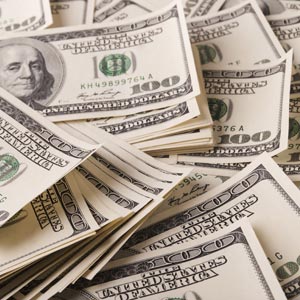