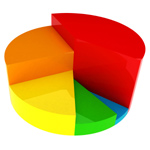 Back in July, we asked the WordPress community whether or not the Hello Dolly plugin should be included with WordPress. Several months later, over 1,200 people have voted, and here are the results: 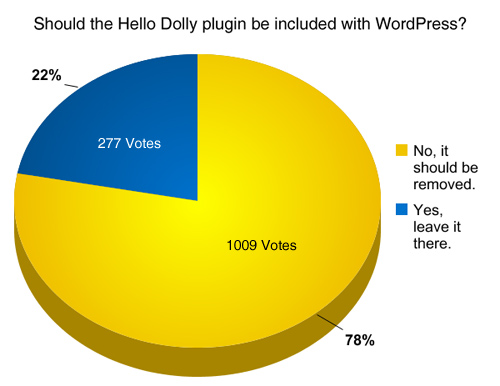 I’m not going to say too much about this, as I think the results speak clearly enough. Many of the comments on the original post made great points on both sides of the issue. Here are some of the central ideas for both pro and con:

Steven Rossi
I’m all for sentimentality, but it is a bit annoying, particularly in that it comes back after every single upgrade.
Jeff W.
Every time I upgrade a WordPress site I ask myself “What is the point of this silly plugin?” Yes, it only takes a moment to remove it, by why be bothered with the hassle. Thanks for bringing this up…I can see I’m not alone.
Chris Coyier
I certainly DO spend time “dealing with it”. For some reason I’ve gotten into the habit of deleting it from every single WP site I maintain (literally dozens). And all that time certainly does add up, especially when it annoyingly puts itself back in during upgrades.
Thomas Scholz
I’m handling many german WordPress blogs. ‘Hello Dolly’ is rather useless in non english websites and demonstrates exactly one point: the anglo-centric mind of the core developers.
Will Anderson
While it does hold some sentimental value as the first official WordPress plugin, I would vote for removing it. If we’re going to have a low functionality plugin bundled with WordPress, it should be a better example of how to do basic plugin actions (IMO Akismet is too complicated and Hello Dolly is too simple).

Steve Taylor
Personally, I’ve grown used to it being there, inactive, as an ambient reminder of the personal-scale enthusiasm that’s the foundation of WordPress. If it was dismissed on utilitarian grounds, I might feel that a little of WP’s soul was gone :-)
Jesse Dijkstra
The plugin is one of the few reminders in WordPress that it is actually coded by individuals who have personal preferences and passions on my opinion. By leaving the plugin it humanizes WordPress and shows that there are people behind the project. In my opinion: leave it, it’s one of the few projects that still leaves this personal notes, and I love it for that.
Jeff
Leave it. It’s a 2K file. Just writing these comments cost each of us more energy than it would take to delete it. It’s a friendly wink from the WordPress developers that says join us and maybe let yourself have some fun with code.
Michael
Look, what everybody on here against the plugin is forgetting is that it’s not there for them. It’s for beginners, and for them, it serves a number of useful functions, including (a) directing them to the world of plugins to begin with, and (b) providing a really simple example of how a plugin is coded.
George
It’s not just a sacred cow. I first learned how the plugin system works by viewing the source of Hello Dolly. It’s simple enough that you can crack it open and clearly see the basic building blocks for building plugins.

There were also some great comments posted at the discussion on this topic over at WPTavern.

Poll: How Many WordPress Plugins is Too Many?

Poll Results: How Many Plugins do You Use?

New Poll: How Many Plugins do You Use? 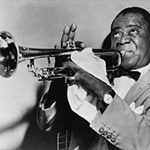