Including jQuery in WordPress (The Right Way) 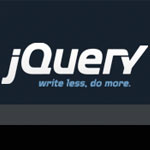 If you want, you can just download jQuery, put it on your server and link to it from your header.php file in the <head> section. But that can cause you grief. For one thing, some plugins use the jQuery library, and they are going to load it as well. This can cause problems. How was your plugin to know you already had it loaded?

Much has changed with WP script loading since this article was posted. These days, WordPress automatically loads jQuery for you, whenever some other script requires it. The smart loading requires that you specify jquery as the $deps parameter when enqueuing your other JavaScript files, for example:

This declares jQuery as a dependency for my-custom-script, so WordPress automatically will load its own copy of jQuery. For reference, here are the parameters used for wp_enqueue_script():

So when we declare our custom script, we set the $deps parameter equal to array('jquery') and call it a day.

Now, let's say that we want to use a version of jQuery that is different than the one that is included with WordPress. We could simply enqueue it, but then there would be two copies/versions of jQuery loaded on the page (yours and WP's). So before we enqueue our own version of jQuery, we must de-register the WP version. Here is the final code to make it happen:

Here we use wp_deregister_script() to deregister WP's jQuery before including our own version, which for this example is the Google-hosted jQuery library, version 3.1.1. You will of course want to change the $src parameter to match the URL of whatever jQuery script you want to use.

So that's the current "right way to include jQuery in WordPress". One important note for theme developers: publicly released themes should use WP's jQuery and not de-register it. Just makes life easier in the long run.

Another thing is that WordPress already includes a copy of jQuery. Here is how you can load up jQuery in your theme the smart (and intended) way. Put the following code in your header.php file in the <head> section:

You are ready to rock, but there are still some considerations. For example, safeguarding yourself from the future possibility of conflict with other libraries. You really shouldn't be using multiple JS libraries to begin with, but... better safe than sorry.

To be super-safe, you can put jQuery into "no conflict" mode and use a different shortcut for jQuery. In this case "$j" instead of the default "$". The standard "$", for example, can conflict with Prototype. Here is an example of a safe bit of jQuery JavaScript:

Can you recognize this bit of code? We use it right here at DigWP.com1 to do the cool "link nudging" in the sidebar!

1 Editor's note: the link nudge demo has been removed (it was part of an older theme design).