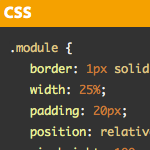 Technically, there is nothing special about showing code on a WordPress site. You just wrap code in <pre> (and probably <code>, for semantics and font control) tags, something like this:

Then you style up the code with CSS like you would any other element. Perhaps you set your code in your favorite monospace font (not required, but keeps indentation nice) and set off your pre tags visually with a dark background.

Remember that <code> tags are “inline”, so you can display a bit of code right within a sentence (like I just did there). <pre> tags are “block” and are used for displaying, literally, blocks of code. Actually, <pre> is just for “preformatted” text, not specifically code, but it preserves whitespace so it’s ideal for code.

If you are posting HTML code, you’ll need to “escape” it. Particularly the < characters, or else it will be interpreted as a real HTML tag and attempt to be rendered as such. My favorite little one-page-app for this is Postable by Elliot Swan. Just paste some HTML (or whatever) in there and hit the button and it will turn it into all the gibberish (escaped characters) you need to safely post that code and have it look as you intend.

I didn’t like having to go through that whole escaping HTML song and dance on CSS-Tricks so I use the Code Markup plugin instead. It’s super old but it works great. We use it here on DigWP too (see update box, below). Essentially, you just don’t have to worry about escaping HTML for anything within <code> tags. If you want particular tags to be rendered (say, you want to use a <strong> tag to highlight a particular line of code) you can use <code markup="strong">. If you want to absolutely ensure nothing inside is rendered (sometimes it has issues with HTML comments) you can use <code markup="none">.

There are a bunch of plugins for this. If you want to go that route, check out this SpeckyBoy roundup post. On CSS-Tricks I do it slightly more manually…

My favorite syntax highlighting helper is google-code-prettify. It’s JavaScript based and library-agnostic so it should work on any site. All it does is wrap <span>s with particular classes around bits of code. Then you use CSS to colorize those classes. They have a variety of themes that come with the download, so you just pick your favorite and include that in your main stylesheet. Here is an example:

Example of some code syntax-highlighted with google-code-prettify

Being Good With Scripts

I use a number of scripts on CSS-Tricks: Prettify, a custom version of Modernizer, Respond.js, and FitVids.js. Loading all of those separately would be rather dumb, and an easily fixable performance problem. I just squish (minify and combine, CodeKit can do this for you) all of them together into a file I call fitspondernizerfy.js and load that up in the head of my document (header.php). Normally you don’t load scripts in the head like that, but most of these particular scripts actually should be loaded in the head.

Then at the bottom of the document (footer.php) I load up my custom script where I call the plugin functions. To kick off the code highlighting, I just make sure all the pre tags have the proper class for prettify (using jQuery) and then call the function:

I’m a fan of doing it this way. Many of the other syntax highlighters have more features but I find most of it distracting, ugly, and bad UX. And most importantly, you’re keeping HTTP Requests down by combining scripts.