Spam Link Injection Hacked (and How I Hopefully Fixed It) 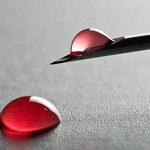 Just recently my other blog CSS-Tricks was hacked. I first found out by a very helpful reader emailing me a screenshot from the mobile version of my site.

The mobile version of my site was built by Mobify, so I contacted them right away. As I should of known, of course Mobify can’t insert content into a site, they only are a presentation layer on top of the already existing content. They were very quick and helpful with their response and sent me some links to useful resources and infos.

After seeing the following screen, I knew that the site itself was hacked. Time is of the essence at this point, because not only do I not want my visitors seeing nasty spam, I don’t want Google bot to cruise through and see the mess and hurt my SEO. I immediately set out to figure out where these spam links were being inserted from. Here’s what I was seeing on the site: 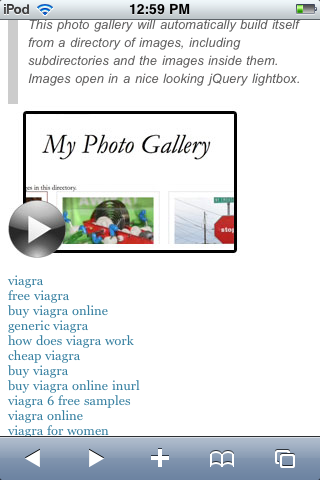 I had this happen to me years ago and it turned out the theme files themselves were altered and spam injected that way. I took a look through all of them quickly and didn’t see anything. I could see from the source on the site that the links were being inserted after the content on each post. I could also see at this point that the links were identical on each post. This seemed like a theme file injection to me, but clearly it wasn’t.

I popped open the WordPress Admin itself and checked out a post. Low and behold, there the links were, right in the content for each post. I checked out a number of them, new and old, and there were all the same. At this point, there were two possibilities. The Admin was compromised giving someone access in there and the ability to edit posts or the Database itself was compromised.

Due to the speed of the attack, the fact that all the links were the same, and that over 500 Posts/Pages were identically altered, I concluded it must have been a database attack.

Here is what I did:

That “style” attribute (inline CSS), when rendered in a typical browser, converted to display: none; and thus were not visible. For whatever reason, when Mobify picked up this content, that weird string of characters wasn’t converted and thus the div was visible not hidden.

The reason I’m sure the hackers chose this technique is that the blog owner may never realize the links were inserted because they aren’t typically visible. I would think that Google doesn’t give any link credit to links that are in a container with display: none, but perhaps the hacker’s theory is that the google bot won’t be able to tell this div is hidden because of the weird code.

I would be interested to know if Google can be duped with this technique. It seems like they would be smart enough to detect it, yet I wouldn’t be surprised if the site is penalized anyway due to being compromised by spam.

How I Removed the Links

Luckily the code that was inserted in every single Post/Page was identical. I downloaded a fresh copy of the Database (as a .SQL file), opened it up in TextMate (any text editor with find/replace will do) and did a find/replace on the block of spammy code (replaced it with nothing). Then I saved a new copy of it and created a new database on the server (hence the change in DB name). I imported the new fixed SQL file and posted WordPress at the new database.

It’s been a week now, and no more problems. I pray that what I have done has fixed whatever the hole was, but of course I can’t be 100% certain because I’m not 100% certain what it was to begin with. Of course, posting all this information surely doesn’t make me any more secure but oh well. I of course have serious backups going on so the worst thing that can happen is I get hacked again and have to restore from backups and keep plugging holes.

Although the spam wasn’t on my site for more than a few hours, someone has pointed out to me that my Google PageRank for the homepage has dropped from a reasonable and healthy PR 6 to ZERO. While PageRank is a very weird thing and it could be any number of things including a random inaccurate report from Google, it seems more likely this is a penalization from them for the spam. Many of my subpages, which get crawled far less frequently, still have their PageRank. It’s not just the PageRank, many searches that would have brought up the homepage (e.g. my own name) are now far down the SERP pages when they used to be #1. This of course will be seriously affecting my traffic until my PageRank is restored, if it ever is.

CSS-Tricks, is non-trivial portion of my income, and if there is a serious dip in traffic it could certainly affect me financially. I’m not whining, it just goes to show that site security is not some abstract nerdy hobby, it’s serious business that can have serious consequences. 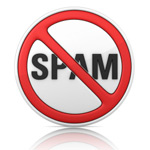 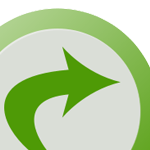